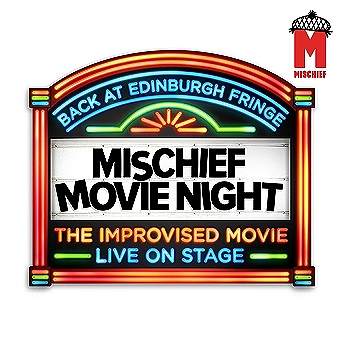 Mischief return to the Edinburgh Fringe stepping back to their comedy roots with Mischief Movie Night, the improvised movie live on stage!

Every show is different with you suggesting a genre, location and title and Mischief hilariously bring the show to life, complete with rewinds, directors cuts, thrilling live music and DVD extras that will have you howling with laughter.

Over 100,000 households tuned in from over 45 countries to watch the live-streamed version in lockdown, now Mischief's Olivier nominated improv delight is back on stage.

Suitable for ages 8 and above.