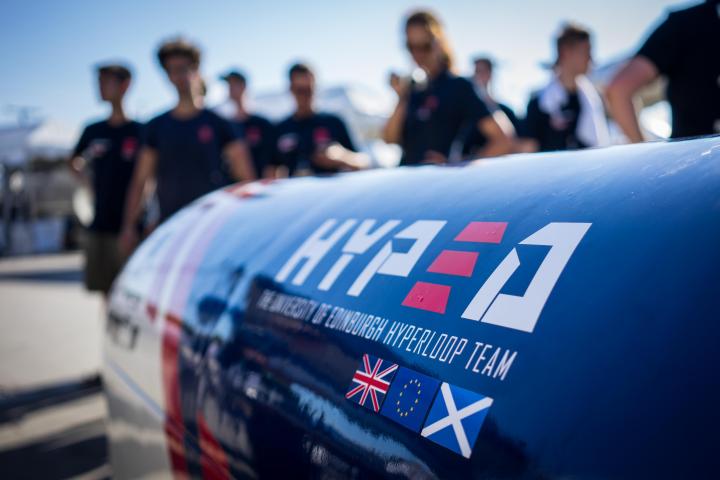 EICC Live: Hyperloop is the first event in our new series of free public lectures.

We're thrilled to kick-off the new series with members of the team from HYPED - a student society at the University of Edinburgh, which is dedicated to accelerating the development of Hyperloop, and implementing the technology in the UK. The HYPED team was founded in 2015 and has grown to over 200+ members. The diverse team comprises of international students across various academic disciplines.

Hyperloop is Elon Musk’s concept for the future of mass transportation. The concept would see electrically propelled pods travel autonomously through a near-vacuum tube. The pods will be able to reach speeds comparable to aircraft, and could see a journey such as Edinburgh to London shortened to 50 minutes.

Hyperloop is garnering global interest and investment, with companies such as Virgin Hyperloop One, HTT, and Arrivo founded to build the technology. Governments around the world are supporting the technology, with progress developing in the UAE, the Netherlands, Finland, India, Russia and the United States.

Gonzalo Gil
Gonzalo was a member of Levitation Team last year and is the Project Manager of Propulsion Team this year. He is intrigued by most things and is passionate about Physics, Music and Space.

Michal Stevove
Michal is a post-graduate student at the University of Edinburgh in Science and Technology in Society programme. He is primarily interested in understanding the social impacts of new technologies, and how these are in turn shaped and adopted by society. As part of HYPED, Michal oversaw research on Hyperloop on topics such as sustainability and failure modes.

Dipti Rapte
Dipti is a second-year Biological Sciences student at the University of Edinburgh. As a part of HYPED Outreach team, she conducts workshops at primary and secondary schools within the UK. Her goal is to communicate the social impact that STEM careers can have, through discussing the stages involved in designing, building and operating Hyperloop.